Posted on September 27, 2012 by Charles Kirtley

Had a scary experience yesterday. I usually keep a few Yuan with me for small personal expenses while I’m out alone. I mostly buy an occasional snack, something at chess club, some ice cream, or a beer ot two at the end of my hot afternoon walks. I also buy bottled water – so nothing much. 500 Yuan (about $75.00) will easily last me a month. Yesterday I went to the ATM at the bank to replenish my money and the machine ate my card. It was the same bank and the same machine I’ve been using for years.

Of course no one at the bank spoke English, but I was able to make one of the clerks understand. She went around back and got my card, but didn’t want to give it to me unless I showed her my passport to prove I was in China legally. There is a big national crackdown on illegal aliens going on here now. I showed her my driver’s license with my picture I.D. and my credit card, all of which proved my identity, but she insisted on the passport.

The bank is about 6 blocks from my house and it was extremely hot and sunny. Plus my walking is still not back to normal, so I really didn’t want to fetch my passport. It probably would have taken me an hour to make the round trip. After consulting with about 6 other employees, they gave my card back. Then the original clerk accompanied me to the ATM, and the card didn’t work again, but at least it wasn’t eaten. I worried that somehow the machine had coded it bad in the original transaction, so it wouldn’t work anywhere. I panicked that I might be stuck in China with no access to money.

There is another bank about two blocks down the road. I went there, everything worked perfectly. I got 1000 Yuan out instead of my usual 500, just in case.

Played chess Tuesday night. About 6 people showed up, most of whom I didn’t know. The club has close to 100 members now, though many are inactive. 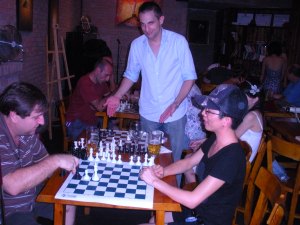 Vivian and Martin are back together. As usual, I didn’t have the story straight. Martin’s mother was staying with them to help with the baby. Vivian and the mother got into a huge fight. The mother left and Martin drove her home, which was a 3 day round trip. Martin and Vivian never fought. While Martin was on his trip, Edison and/or Sea stayed at Vivian’s house with her. Now he’s back so everything seems OK between them.

Vivian now comes here every morning so Sea can help with the baby. Yesterday they took the baby out for some shots. They went to a real hospital, not the TCM hospital, I was happy to find out. Some days Vivian goes to her office for a while. They give you 170 days maternity leave here, so she usually isn’t gone long.

Vivian will be here soon. Sea just went out for soup from KFC for our breakfasts.

It rained about 10 seconds early this morning, but now it looks like it will be another very hot and sunny day.

Have been living in SE Asia and China since 2007. I have an opinion on most every subject, and don't mind sharing them. Lover and collector of worthless facts.
View all posts by Charles Kirtley →
This entry was posted in Living in China and tagged ATM, Automated teller machine, Bank, china, Credit card, KFC, Martin, Vivian. Bookmark the permalink.