Posted on October 1, 2012 by Charles Kirtley

Sunday. August 12, 2012. We were supposed to get up at 5:00 and we had a black taxi lined up to pick us up at 5:15. Of course I woke up at 3:30 and couldn’t get back to sleep. It was storming badly with lightning, thunder and heavy rain. Sea woke up soon after I did. We had everything packed. We showered the night before, so all we had to do was brush our teeth, stick the toothbrushes in the suitcase and we were ready to go.

We traveled with one small suitcase for both of us and my small back pack. You can’t imagine how refreshing it is to travel light.

Anyway, the car was right on time and we made to  the airport a few minutes before 6:00. By the time we got checked in and got through security it was a few minutes before 7:00. I looked for a cup of coffee, but all I could find was a can of cold Nescafe coffee with cream and sugar. I bought it, but that was a mistake. It was terrible. I should have bought a bottle of water instead.

We boarded the plane right on time. It was supposed to board at 8:10 and leave at 8:40. At 8:40 the doors were closed and the engines were fired up. Then we sat at the gate until 9:45. No explanation.

Once we finally got going, the flight was nearly perfect. The storm had passed and there was hardly a bump in the 5 hour flight to Urumqi, the capitol of Xinjiang province. They served us lunch. Sea and I both had fish and rice, a carrot, apple, corn, and cheese salad, a   small tray of cherry tomatoes, plus a few other things. It was OK for airplane food. We were supposed to have a 2.5 hour layover in Urumqi, but because of out late start we only had and hour and a half to kill.

Sea was hungry so we stopped in a cafe in the waiting area. She ordered mutton skewer and some sort of fruit drink. She got a single mutton skewer with 4 pieces of mutton on it. It was 20 Yuan (about $3.50) . Her fruit drink was 68 Yuan (about $10.00). She apologized 10 times for not paying attention to the prices. I was going to have a beer, but they didn’t serve it, so I told Sea I would find a beer and meet her at the gate. It turned out they didn’t serve beer in the Urumqi airport, probably because of the Muslim influence. There were about a half dozen coffees shops, but the coffee was $8.00-$11.00, so I didn’t get any.

The flight from Urumqi to Xinjing left right on time and it too was very smooth. We passed over a very tall mountain range. I assume were flying about 30-35,000 feet. The mountain were right below us. They must have been 20-25,000 feet high. They were covered in snow and glaciers and had almost no vegetation. At the base of the mountains was Xinjing where we landed.

It was a very small, but brand new airport. There was only one runway, so the plane just made a u-turn after we landed and went to the terminal. The terminal was huge. It seems Xinjing has been declared a Special Economic Zone, like Shenzhen. I guess when they built the terminal they built it in expectations of future growth.

Our hotel had a car waiting for us and we got checked in with no problems. Like most big new buildings in China it looked great from the outside, but the inside was not well kept up. The furniture was worn, the rugs had stains and cigarette burns, and the windows were filthy. It was a 4 star hotel, though I’m unsure how it got the rating.

The entire of China is on the same time. They don’t have zones like we do in the USA., so since we were about 3,000 miles west of Shenzhen, it didn’t get dark until about 22:30. About 19:30 we went out to look for a place for dinner. It turned out we were in a Muslim area of town. Sea wanted noodles for dinner. I wanted mutton grilled over charcoal. We walked about an hour or an hour and a half and found nothing. The Muslims were setting up  their night markets which were interesting, but they were selling things to take home, rather than street food. There were lots of nuts, dates, and spices. Sea bought a bunch of grapes to take to the room. They also sold pastries and breads that looked good, but I didn’t try anything. Maybe tomorrow.

We headed back to the hotel to have dinner close to a place there. We noticed a little place right across from the hotel. It served mutton cooked over charcoal as well as noodle dishes. There were no people there, so I was a little hesitant, but we stopped anyway. It turned out to be a good decision. I had 5 mutton skewers that were great and Sea had her noodle dish. We decided we’d go back tonight.

At some point I developed a giant blood blister on my right big toe. It is half the size of my toe. I have no idea how it happened, we didn’t walk that much. I am wearing my most comfortable shoes, the same ones I walked for 6+ hours in Hong Kong a few weeks ago. Anyway, it’s there and is very painful, and I only have one pair of shoes, so I’m going to have to live with it.

The picture below is of a mosque standing beside an ancient Chinese temple in Xinjing. 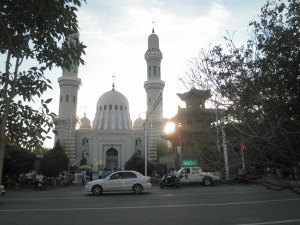 Monday. August 13, 2012. This morning, Monday the 13th, we went to the hotel’s complimentary breakfast. It was kind of Muslim/Chinese mixture. It’s what Sea was brought up on, and she ate like as pig. Actually she always eats like a pig, but she’s active enough to get away with it. I had some bean sprouts with noodles, some tiny sausages, yogurt, a roll, a fried egg, and three cups of great coffee. I think it was better than the Vietnamese coffee I’m always talking about. Maybe I’ll find a store to buy some. 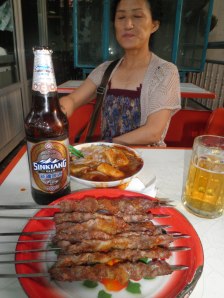 As I write this Sea is taking care of her business. I don’t know when she’ll be back or what we’ll do then. With my toe in bad shape we’ll not be doing a lot of walking. Tomorrow we’re going to her home town for two days.

Have been living in SE Asia and China since 2007. I have an opinion on most every subject, and don't mind sharing them. Lover and collector of worthless facts.
View all posts by Charles Kirtley →
This entry was posted in Expat News, Living in China and tagged Ürümqi, china, hong kong, Muslim, Shenzhen, Special Economic Zone, United States, Xinjiang. Bookmark the permalink.