Posted on October 4, 2012 by Charles Kirtley
Thursday and Friday. August 16-17, 2012. Since I am writing this from memory, these two days kind of run together. I’m sure everything happened, but the sequence of events might be a little off.
Sea went to to complete her business Thursday morning. She returned in about 2-3 hours mad as a wet hen. It seems she needed a form from the Shenzhen police stating she had no criminal record. She wasn’t aware she needed it, and didn’t have it. Apparently the paper pusher was very rude to her too. He said the only way to get the form was to return to Shenzhen then bring it back, covered in the proper red stamps. A FAX or a phone call or a FedEx delivery wouldn’t do. 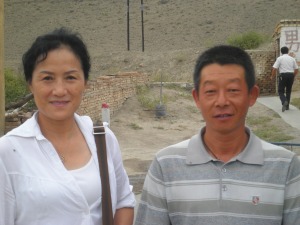 Sea got on the phone and stayed on it all day. She talked through lunch and dinner. She called everyone she knew and anyone they might recommend she talk to. Finally at 22:30 she put the phone down as we were finishing dinner. She was unsure what she had accomplished, if anything. She said we’d find out the next day. 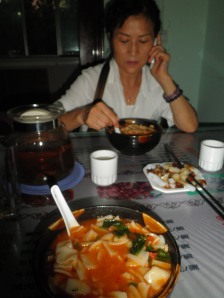 The next day she was back on the phone, and about 11:00 she got the results she needed. She ran out and got that business behind her. We celebrated by going to a Muslim bazaar a few blocks from the hotel for lunch. There was a rice dish she loved and hadn’t had for 20 years. They served it in several stalls. It was basically what we call fried rice with only carrot slivers in it. We got two plates, one a little pieces of beef sprinkled on top, the other had chicken. We shared as usual.
This is where my time frame gets a little blurry. There was one more piece of paper she needed. The person she needed to see was off duty because of a Muslim holiday. The office was open and she offered whoever was on duty a 1000 Yuan bribe to take care of what she needed. This is a fairly substantial bribe, about 2 week’s typical salary, but the person refused. I assume they get so many bribes that 1000 Yuan was inconsequential. So we are stuck here until Tuesday, August 21, when the person will be back from his unsanctioned religious holiday. I’m beginning to understand why Sea hates Muslims. 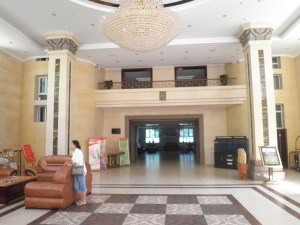 Sea ranted about how corrupt the Muslims are and once she has finished her business here, she’ll never return.
The time when we went to the noodle restaurant the people seated across from us had this giant plate of what appeared to be boiled mutton, bones, fat and all. It smelled great and I told Sea the next time we went to dinner, I wanted to go there and have the mutton. I think it was the next night we ended up there. It turned out the people we observed had a whole order of mutton. We were able to get a half order at half price. It was great. It had little if any seasoning, so the taste of the lamb came through full force. Sea ordered a giant bowl of noodle soup. We intended to share both dishes, but I ended up eating 90% of the mutton. She ate 100% of the soup. I felt almost sick from over eating. I skipped breakfast the next morning. 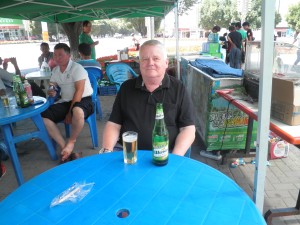 Have been living in SE Asia and China since 2007. I have an opinion on most every subject, and don't mind sharing them. Lover and collector of worthless facts.
View all posts by Charles Kirtley →
This entry was posted in Expat News, Living in China and tagged Cook, FAX, Friday, Home, Lamb and mutton, Muslim, Noodle soup, Shenzhen. Bookmark the permalink.