Friday. August 24, 2012. Today Sea is meeting her friend from high school for lunch. He was the main person who helped her get past the documentation problem she had about getting her police records from Shenzhen. She wanted to thank him and give him a gift, and gave him 2000 Yuan. Giving cash gifts for favors seems to be the accepted way of doing things. For all I know he might have had to bribe someone himself.

Apparently quite a few of her classmates made it to the big city, Urumqi, and the lunch turned into an all afternoon party. I think there were 5 or 6 classmates and a few spouses. I didn’t go, deciding to wander around the neighborhood instead.

About 15:00 I had 3 mutton skewers then returned to the room, turned on a karate movie, and took a nap until Sea arrived. Shortly after that, the sister came by and I went out alone again until dinner time. We had various noodle dishes at a place within walking distance from the hotel. 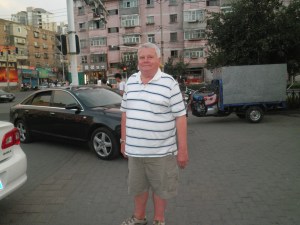 Saturday. August 25, 2012.Today the girls went shopping so I was on my own again. I wandered around in a different direction than yesterday. When they returned they had bought a few  small gifts. Most were clothing gifts for Vivian’s and Nina’s babies. They brought me two small jars of a herbal tea that is supposed to be good for fat in the blood. It is only available in Xinjiang Province. Sea bought a large jar of honey. 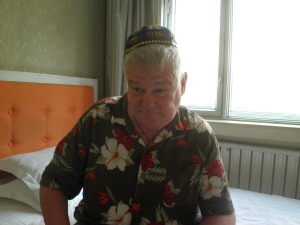 Sunday. August 26, 2012.This morning the sister came by. They had rented a car and were going to visit a cemetery. Naturally I decided not to accompany them and wandered around is a new direction from the hotel. Our flight didn’t leave until 21:10, and Sea had made arrangements to leave our luggage in the room until 18:00. I hit the street again and wandered around until 15:00 when I stopped in a barbecue place for my final mutton skewers. I wasn’t really in the mood for more mutton, but the place didn’t have a picture menu, so that was all I was able to order.Just as I began eating Sea called wondering where I was. I told her I was eating lunch and would be back in a half hour or so. 10 minutes later she called again, so I stuffed the rest of mutton down and headed back to the hotel. I had the room key, so I assumed she needed to get into the room for some reason. As I was walking to the hotel Sea met me on the sidewalk, got the key card and the luggage keys from me and took off. It turned out the car they had rented that morning was going to take us to the airport too, and the driver was waiting.

After loading the car, we headed to the airport. On the way we stopped for lunch. Of course I wasn’t hungry and just had a glass of some sort of apple cider. The driver ate with us. We got to the airport about 17:00, 4 hours before the flight. Sea had bought two large boxes of Xinjiang grapes to take home. Apparently Xinjiang fruit is very famous and good. I remember the first thing Vivian said when she talked to her mother was asking if she had eaten any Xinjian watermelon. It’s supposed to be the best in the world. They had boxing stations in the lobby of the airport so the fruit people were carrying could be boxed and checked as luggage. Sea and her sister had the grapes boxed and banded. They must have weighed 15++ pounds.

We couldn’t check in until 19:00, so we found a chair in a coffee shop where we sat until check in time. There have been a couple of attempted hijackings in Urumqi in the last few months, so security was super tight, but we finally made it to the gate and eventually on the plane. The flight was smooth, I think I might have even slept a few minutes.

We landed a little after 02:00 on the 27th. After collecting our luggage we got a taxi and headed home. It was nearly 04:00. I had never been out that time of night. The streets in the neighborhood were covered in litter. It looked like all the stores and restaurants and groceries just threw their trash into the street. Somehow everything gets swept up, and the streets get washed before the morning.

So that ended out trip to Urumqi. It took a week longer than we planned because of bureaucracy. Since none of the hotels had WiFi I felt out of touch with the world. Before I went to bed I turned on my computer and read a little news.

Have been living in SE Asia and China since 2007. I have an opinion on most every subject, and don't mind sharing them. Lover and collector of worthless facts.
View all posts by Charles Kirtley →
This entry was posted in Expat News, Living in China and tagged Ürümqi, Hotel, Lamb and mutton, Shenzhen, Vivian, Xinjiang, Yuan Dynasty. Bookmark the permalink.