FRIDAY, OCTOBER 19. Afternoon. It was very pleasant today. It was sunny and cooler, I’d guess about 75 degrees. Met a 66 year old Chinese man named Robert on my walk this afternoon. He spoke pretty good English. We sat in the park and talked about two hours. 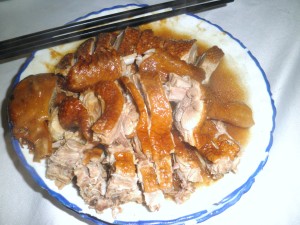 Then on my way home I stopped at a small cafe for a cold one. Since the cafe was fairly crowded, I felt obligated to order something from the menu to justify taking up a table. It was a picture menu and I ordered what I thought was a pigeon. I really don’t like pigeon because it’s so bony, but it was relatively inexpensive, and I wasn’t hungry so I pointed it out. What I got was a whole duck, including the head, feet, and bones. It was cut up, and of course no bones were removed. It tasted great and I ended up eating almost half of it even though it was close to dinner time. Cost: about $6.00. Picture above.

SATURDAY, OCTOBER 20. Another cool and sunny day. The air was relatively clear.

I don’t remember if I told you this before, but when I returned to China, Sea, Vivian, and a male colleague of Vivian’s met me at the Hong Kong airport. We went to dinner together at a very nice restaurant before he took us home. 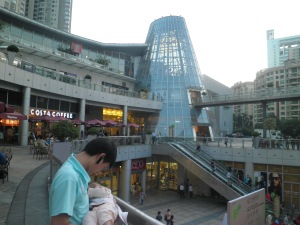 Anyway, the colleague is returning to China and he, his wife, Vivian, Martin, Sea, and maybe others are getting together this afternoon. I guess we’ll have dinner, but who knows. The picture above is of the interior of CoCo Park.

Went to dinner at a very nice Chinese place in CoCo park, then went to Club Viva where we played dice and danced (I didn’t dance) until 02:00. Edison didn’t come to dinner, but joined us later. Vivan’s colleague, a Brit named Daniel, brought his Korean wife named Ellie. Daniel taught us several new dice games. We had a very nice evening. Got home about 02:30. That’s the latest I’ve ever stayed out in China. Unfortunately my camera can’t take good pictures in the dark, so I have nothing of the very large crowd at Viva.

La Casa where I play chess is close to Viva, so I walked over there to say hello to David, the owner. Surprisingly there were still two games going on. I interrupted to say a few words to everyone.

SUNDAY, OCTOBER 21. Thankfully the construction next door did begin in earnest until 08:00 this morning. I slept in until 07:00. Sea and Edison are still in bed as I write this, 09:30. It’s another cool, bright,  and clear day.

Have been living in SE Asia and China since 2007. I have an opinion on most every subject, and don't mind sharing them. Lover and collector of worthless facts.
View all posts by Charles Kirtley →
This entry was posted in Expat News, Living in China and tagged Asia, china, David, dinner, Edison, hong kong, Hong Kong International Airport, Vivian. Bookmark the permalink.